Why the ‘it’s always a good time to buy’ statement is false.

Property is not the largest investment the ordinary person will ever make – as the industry likes to claim. That, in my view, is your pension.

But it remains an important decision nevertheless, and one that anyone in the middle to upper class will make several times in a lifetime.

Know that when you read most comments and articles about the state and future prospects of home prices in South Africa, as elsewhere in the developing world, you are most probably reading marketing fluff.

Developers, estate agents, home-owners, banks, mortgage originators and everyone else in this industry is always optimistic about the market. Google the property market going back over the last five or six years and most, if not all commentary about the outlook for property prices is always positive. “It’s always a good time to buy property, some more so than others,” is the constant refrain you get from estate agents.

Cassandras like myself and property economist Erwin Rode tend to get shouted down when we dare suggest property is not as good an investment as most people suggest – with the exception of in the Western Cape, Sandton and maybe a small part of the KwaZulu-Natal north coast.

For the rest, the residential property market is still in the grips of a seven-year bear market with property prices in real terms, i.e. after inflation, still down 20% or so from the peak at the end of 2007.

Secondly, property prices in SA have not recovered after the Great Financial Crash in 2008, as has happened in cities such as London, New York, Sydney and Toronto for instance. This suggests that something fundamental has changed as far as our residential property market is concerned.

I tend to go to three sources for my research in the local residential market: the surveys conducted by Absa, FNB and lately Pam Golding. Each one measures something different, so a strict comparison is not always possible. When I get hold of it, the Rode survey also has some very academic work done by the Bank for International Settlements (BIS) (part of the World Bank), which analyses property trends on a global scale.

Trends in the local property market

Dr Andrew Golding, MD of the Pam Golding (PG) Property group, is quoted in its latest newsletter: “As has been seen over the decades, in buoyant times and even through recessions, investment in property has proven a sound decision for home buyers and investors. In fact as a catalyst for wealth creation it’s hard to beat, particularly over the medium to longer term.”

Well, dear reader, you can make of that what you will, but I see it as further misinformation about the true state of the property market. People make decisions on those kinds of statements and there is no recourse if things do not turn out as positive as the expectation created.

Elsewhere in the report it states very clearly that property prices, according to the Pam Golding Properties National Index, which measures resales within the group, have not increased in real terms in over ten years. Yes, dear reader, your property, on average, is worth less than it was ten years ago in real terms. If you bought at the peak, at the end of 2007, your real decline in purchasing prices is down anything between 20% and 35%. 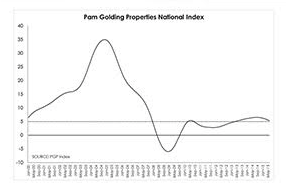 You will find virtually the same information and conclusions in the Absa and FNB surveys. The bottom end of the market, with prices under R1 million is buoyant, with prices rising between 7% and 9% annually, but the current price movement in higher-priced properties is muted at best. On average homes valued at between R1 million and R2 million are rising at about 3.54% nationally and even less for those above R2 million.

It’s when you move into the price-range above R3 million that the alarm bells start to go off, at least in the PG survey. In June house prices in this category declined by 2.7% from a year earlier following a decline of 0.4% in May. This is the first time since the 2008 recession that house price inflation slipped into negative territory. Many reasons for this trend come to mind: a lack of consumer and business confidence, the poor state of the economy, middle-class wealth under severe pressure (electricity, medical aid schemes, food, petrol and weak rand) as well as threats of possible ‘custodianship’ of all kinds of property – one of government’s ideas currently being floated.

I have another reason. Wealthy individuals with disposable cash would rather invest their money offshore to protect against a declining currency, than upgrading or buying more property, as would have been the case years ago.

And as far buy-to-let? Don’t let me even get started on that issue.

P.S. Yet another month and I still have not received clearance papers for a property I sold in Johannesburg in January. And we still claim to be a World Class African City. Yeah right.