As the extended lockdown takes its toll, retirement savings are being viewed by some as a kitty to survive the lockdown that has wreaked havoc in many households’ finances – but the danger is that often, there isn’t enough saved up to begin with.

According to Sanlam Employee Benefits, which conducted its annual retirement survey in the middle of the lockdown this year, almost a fifth (16%) of retirement funds members requested access to their savings.

“The reality [is] that many workers need support due to the loss of income or reduced earnings,” said Sanlam Corporate’s chief client officer, Rigitte van Zyl.

Sanlam’s statistics are in line with Statistics SA data, which showed that 51.7% of people who reported income reduction have already looked at the option of accessing their savings to survive.

Viresh Maharaj, Managing Executive of Sanlam Corporate, said the retirement administrator looked at how funds could help people with these short-term financial constraints. The popular option was to temporarily suspend retirement contributions by people who remain employed.

Sanlam also explored how allowing people to make once-off withdrawals and allowing people to take up to R1 million instead of the current R500 000 in cases of retrenchments or death of employees could help. But unfortunately, most people don’t even have enough money to take advantage of these relief measures.

Most people have too little to fall back on

“A look at Sanlam’s administration data is informative, as about 50% of members have fund values that are less than R50 000 in their accounts. Only about 10% have balances greater than R500 000,” said Maharaj.

Maharaj added that although 95% of members count their retirement funds as the only form of savings they have in their names, more than two-thirds have not saved enough to even cover six months of their salaries. With this, Maharaj said the retirement funding system is not geared to meet the short-term survival needs, thanks to the low preservation rate in the country, as people often cash out their retirement savings when they change jobs.

The low preservation problem has always been a talking point for retirement fund administrators in the country, as each year that they publish new data, people who are in a position to retire comfortably do not even reach 10%. This was also highlighted in Alexander Forbes’ 2020 Member Watch survey, which the company presented on Monday.

In that survey – which gauges the state of the industry well, considering that Alexander Forbes is the biggest retirement fund administrator, with over 1 million members – the average amount that people had as their retirement savings was just R357 258. The total number of members who are expected to retire comfortably, earning at least 75% of their pensionable salary, was just 6%.

Even though this data showed that most people need to start pulling up their socks so that the next crisis may find them in a better financial position, Maharaj said about a quarter of employers and 9 in 10 retirement consultants reported that they or some of their clients have suspended retirement contributions.

“We anticipate that these proportions would have increased since the survey was conducted…And we actually anticipate that most of the suspensions are likely to be rolled over in time,” said Maharaj.

Is the retirement conversation going over people’s heads?

Confronted with a stagnating economy, where wages and salaries have fallen in real terms, in a country without an adequate social net, saving for retirement has fallen far down the list of priorities in many households.

Trade union federation, Cosatu, has been calling for retirement funds to find a way to meet some of their members’ immediate needs, like home ownership. The union argues that until people have addressed those essential needs, it will remain difficult for workers to picture a life in retirement, hence their lack of saving and preservation.

Van Zyl said Covid-19 and the lockdown have indeed exposed the fault line in the retirement funding system. “Realities of limited cash flow and emerging debt often trump the long-term creation out of instinctive need to survive,” she said.

David Gluckman, head of special projects at Sanlam Employee Benefits, opined that big retirement funds have a responsibility to rebuild the country by investing in impactful projects because 99% of their members will retire in SA and their savings won’t matter if they are going to retire in a wasteland. Alan Wood, head of Simeka Consultants & Actuaries, said there are still good opportunities available in SA for retirement funds to invest in, including inflation-linked and nominal bonds, which promise good long-term returns.

Sanlam Corporate CEO, Thinus Alsworth-Elvey, said the fact that less than 10% of members achieve desired retirement outcomes spoke to deep systemic challenges that must be addressed now to remain relevant.

“One of the challenges is that the industry was built where most of the focus was on the decisionmakers, board of trustees or employers, with not enough focus on the actual members. We tend to have a one-dimensional view of our customers and if we don’t change, the industry is going to go through some really big challenges,” he said. 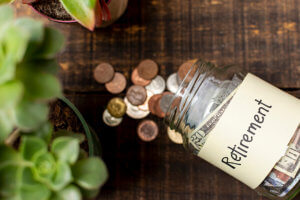